Earlier this year, I found myself on the verge of burnout. I help with a nonprofit that works at the intersection of the LGBTQ and traditionally-minded Christian communities, and I noticed feelings and emotions within me I’ve never really experienced before in this work.

Anger. Bitterness. Hatred of the ‘other.’

This work is hard and isn’t for the faint of heart. Verbal slurs and emails telling you how wrong you are are a common occurrence (both sides of the ‘culture war’ I should say). Personal attacks about my character abound just because I’m gay, even though those who pass judgement do not even know me. Getting emails from LGBTQ people who were open to exploring the Christian faith telling me they aren’t willing anymore due to seeing how Christians responded to the World Vision debacle. Talking with people considering suicide because of the belief that God can’t love them because of a sexual orientation they did not choose. Receiving emails from closeted Christian youth afraid to share with their youth groups and/or parents because they are afraid that they will forced to leave their homes or be rejected by those they love.

It weighs on me.

Instead of responding from a place of love and compassion, I found myself reacting with anger and sarcasm. And I didn’t like who I was becoming.

I needed a change. I needed Jesus.

I made a decision to take a short break from my duties at the nonprofit and pursue ministry in a different context. I found an open position for a summer chaplain at an organization that works in Appalachia, and it intrigued me. As I browsed the organization’s website, I noticed a non-discrimination policy that included sexual orientation. I thought it was too good to be true. It’s not common to see a Christian ministry include sexual orientation in its non-discrimination policy, especially in the South.

I applied and found myself serving as a chaplain from May to August to college students.

In all honesty, this new adventure terrified me. What if I couldn’t connect with them? What if I was a lousy minister? Underneath all these questions was my biggest fear: What if they find out I’m gay and reject me? It’s hard to admit that I still have this fear, but I do. Every time I attend a new church, volunteer to serve at a ministry event or lead a Bible study, this fear is there.

The anxiety I had over this deep-seated fear threatened to overtake me the first evening I began this summer job. I even began to pack my bags and drive home. Thankfully, I called a friend who helped me calm down and embrace this challenge.

I’m so glad I stayed that night and the rest of the summer.

Who would have thought God would use 130 college kids as a healing balm for my soul? I watched as a group of young men and women who have different political, moral, and theolgical views come together to serve communities in Appalachia. Not only were they able to work together, I watched them grow to embrace and love each other.

And they embraced me. They could have cared less that I’m gay. They didn’t even question whether or not I could be a Christian because I’m not straight. They weren’t afraid to hug me.

This was the first time I have ever worked in a Christian organization where I did not have to hide certain parts of my identity.

It was beautiful and healing.

To the young men and women I chaplained this summer:

Thank you for allowing me into your lives and embracing me. God has used your love to restore some broken areas in my life, and I am forever grateful to you all. I love you! 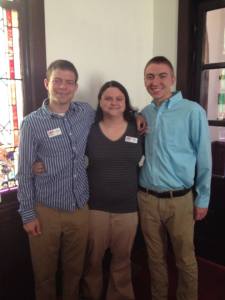 One thought on “Unexpected Restoration”

I am a devoted Christ-follower seeking to love God and to love others in this messy world.